Back up and Review Final Say 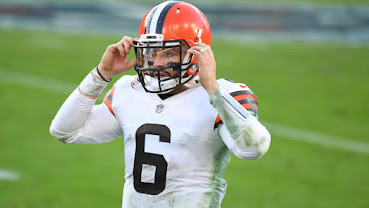 (Image Information: N/A Baker Mayfield is and should be everyone's hero as he takes on the entire country to become the best quarterback to ever walk the planet)

The first post on the weekly announcement was a picture of nemo in at his house. That poor guy went through so much and I'm glad to see him finally resting up at home.

The video I watched was the gif of the wheel-shaped diagram featuring the 12 zodiac signs. Now, I personally am not a believer of the zodiac signs as I believe anyone can relate to virtually anything and any situation in some way. However, I respect those who do believe in it, I think it's a pretty cool way to predict our behaviors or even the future by looking at the beautiful stars.

Now, as this is my last post for this course, I just wanted to finalize my thoughts. It has been a tough semester with my mother going through surgery, and my parents actually moving to Michigan on such short notice. Everything is fine though, as my sister and I are well old enough to handle our own once we both graduate from OU. Or I hope, at least. This course was honestly just a lot of fun as I was able to explore areas that I have not been able to. Writing seems to be something I very much enjoy as the more stories I wrote, the more I found myself writing longer and longer. Anyways, this is it. What a strange semester it has been but I'm glad I was able to finish it.

-Death Note is the name of the anime show that I just finished watching. For any fans of anime, thrill, and seat-grabbing action, then this is the show for you.

-Shinigami is the name of the grim reaper in Eastern Asia.

-Izanami is the Japanese goddess of both creation and death. Pretty powerful, huh?

-Izanagi is the husband of Izanami and one of the original creators of the world. 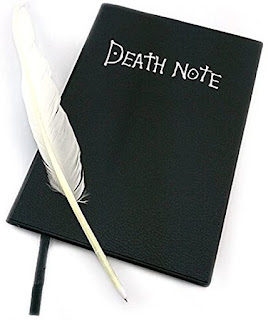 Just another normal day of going to work, Michael had no idea what would happen to him today. On his drive to work, Michael was suddenly stopped by a black notebook that was thrown onto his front windshield while stopped at a stop light. He immediately got out of the car confused, and grabbed the strange looking notebook.

When he opened the notebook, the front page was filled with writing. As Michael read on, his eyes widened.

"Rule #1 of Command Note: The name of the person you write down on this notebook shall obey one single command of the user's choice"

Power. That was all Michael could think of.

Big 10: Anything and everything for you Mr. Ohio State!

Have you guys ever seen the anime show called "Death Note?" My goodness, what an incredible show! I finished the entire series in three days and I wish I could have been more productive. BUT, it was well worth the time I put in. It was simply one of the best shows I have ever watched and it just keeps you on the edge of your seat for 37 episodes. Anyways, I wrote the story as I was thinking about the show and it has similar angles to it. The tweet refers to the Big 10 committee kneeling down for Ohio State and changing the rules in their favor of getting into the conference championship.

Email ThisBlogThis!Share to TwitterShare to FacebookShare to Pinterest
Labels: Microfiction 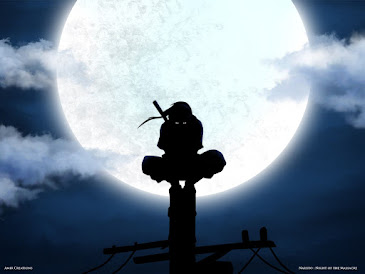 (Image Information: Itachi background photo https://www.pinterest.ca/pin/326159197990039503/)
Short Story
It's 5 o'clock in the morning. Conversation got boring. We weren't getting anywhere. She went to her bedroom. I couldn't follow. I stayed in the living room. What more could I have done? Hours after hours, we'll never understand each other.
*Girl screaming
What? What was that? I rush down the hall way and swing the door open to her bedroom. I find her on the floor just laying there, face-down. There's a pool of blood where she is lying. The window is open, curtain dancing in the wind. A dark figure paused as they were escaping through the window.
“Come find me.” He says as he disappears out of the window.
What is going on?
Tweet:
Gyms must remain open during the pandemic. The constitution guarantees freedom of the press.
Author's Note:
HAHAHA, okay, the tweet is AMESOME. You have you admit. Okay, fine, I'll admit that I stole that tweet. It's so golden, though, that is actually one of the best tweets I have ever seen in my life. For the short story, I started off with the T-Pain's song and then just ran with the story. I wasn't sure if I wanted to write a murder mystery or what, but remembered that I just recently watched an anime show called Death Note and went with something similar.
Posted by Way of Taeam at 11:25 PM No comments: 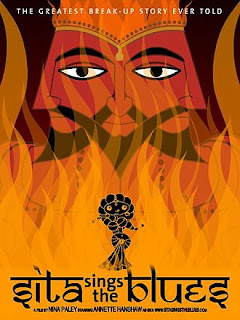 -Sita sings the blues on the shore of the river. She gives birth to twins, Lava and Kusha. From Valmiki, they learn to sing the praises of Rama.

-Nina calls Dave in India and begs him to take her back. The narrators debate Sita's devotion to Rama. Sita sings the blues again, looking at Rama's picture.

-Rama hears the boys singing in the forest. He learns they are his sons, and they learn Rama is his father. He asks that Sita once again prove her purity.

-Sita calls upon Mother Earth to prove her purity and take her back into the womb. Sita sings about her love for Rama one last time, and then leaves them behind.

-In New York, Nina reads the Ramayana and works on the film. You see Chandra the moon god, Vishnu rubbing Lakshmi's feet and the final credits roll.

-The way this story is told and the way I listened will have an effect on how I would tell stories in person from now on. My story telling just isn't up to where I thought it was and I want to be able to make my words come to life.

(Image Information: Sita Sings the Blues https://www.sitasingstheblues.com/)
-Dave breaks up with Nina by email when she is in New York. Her heart breaks and she burns with grief.
Sita tells Rama she is pregnant. Meanwhile, a laundry man (a dhobi) beats his wife, accusing her of being unfaithful and comparing her to Sita.
-To protect his reputation, Rama tells his brother Lakshmana to take Sita into the forest and abandon her.
-Sita, now very pregnant, sings the blues again. Lakshmana, weeping, takes her into the forest and abandons her. Nina is living in Brooklyn, and she dreams about Dave.
-Sita thinks it is karma from a past life that is bringing her grief. She would kill herself if she were not pregnant. Valmiki rescues her.
-Sita sings the blues on the shore of the river. She gives birth to twins, Lava and Kusha. From Valmiki, they learn to sing the praises of Rama.
-Nina calls Dave in India and begs him to take her back. The narrators debate Sita's devotion to Rama. Sita sings the blues again, looking at Rama's picture.
-Rama hears the boys singing in the forest. He learns they are his sons, and they learn Rama is his father. He asks that Sita once again prove her purity.
-Sita calls upon Mother Earth to prove her purity and take her back into the womb. Sita sings about her love for Rama one last time, and then leaves them behind.
Posted by Way of Taeam at 1:04 AM No comments:

For this tech tip, I decided to go with the bloggerprofile. In this exercise, I was able to change my profile picture that displays to the world. I chose the picture of my cat, Ziggy, who is sitting on the recliner in such position that is so human. This picture is my profile picture for numerous other accounts that I have on the internet and I think it is a decent representation of how I feel most of the time: relaxed and annoyed. 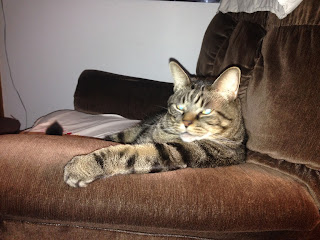